Educated in England at Cheltenham and Cambridge. Academic grade AA. Both her brothers were killed in a re-entry collision in 2012. Her father was an eminent European scientist who died in 2013. Mary studied astro-physics at Havard, and was co-opted onto the UNIPC Research Council in 2015. Commenced civilian pilot training in 2006 and became a noted stunt pilot and free-fall parachutist. Terrahawk security rating downgraded to ZY due to Mary's mother, Grace Falconer, being regarded as a possible hostage risk.

Has a powerful intellect combined with a fearless daredevil streak. Mary has a charming and persuasive nature. A born diplomay and a excellent public speaker, she had natural leadership qualities. Calm and collected in an emergency situation, she will not suffer fools. and expects the highest standards of achievement from all who work with her. Highly instinctive. she often displays a sort of 'sixth sense' of impending danger. mary is very protective towards the Zeroids and very much respects their feelings and their claim to have certain human qualities. 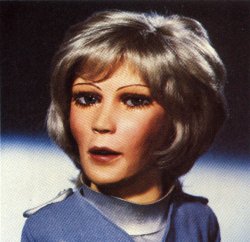