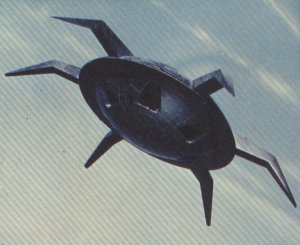 Early intelligence reports give only a hint as to the full and terrible threat posed by this Alien force.

E.I.D. Report - Z001
Zelda's fleet is known to comprise at least six massive space ships of unique design, together with a seventh circular ship.
Prior to the descent and landing on Mars the six giant modules appear to dock in flight with the seventh saucer-like ship, and the whole vast conglomeration descended to the planet, setttling with great turbulence, and taking on the appeare\ance of a huge space city. Six enormous spokes protruded from the central hub.
Almost at once, from the very nucleus, a craft shaped like an inverted cone arose and hovered - silent and watchful - defying gravity.... and anything which dared to stand in its way.
No one can doubt their evil intentions.
The NASA base on Mars was obliterated without warning and without mercy.

E.I.D. Report - Z002
The central hovering cone is Zelda's flying headquarters. the whole fleet has travelled from the planet Guk (solar system Alpha Centauri) more than four and a half light years away! their technology must be incredibly advanced.

E.I.D. Report - Z003
Zelda appears to have 'personal control over matter'. She seems capable of changing the shape or size or identity of solid objects by exercise of some inner mental power. It seems she cannot sustain this trickery for long periods and her powers diminish as she becomes tired.
Still no hard information about craft design or armaments. Zelda appears to have some members of her family on board. 'Yung-star' and 'Cy-satr' have been referred to.