Discovered as an infant, apparently abandoned, on the lower slopes of Mout Fuji, Japan, in January 2000. Adopted, named and brough up by the elders of the Temple of Knowledge. Identified as a child prodigy at the age of 4, he won honours degrees in mathematics and physics at the age of 10, He is a teacher of martial arts, the author of innumerable research papers, and a copious inventor. He achieved international acclaim at the age of 14 for his discovery of auto-molecular-reconstruction. Joined TERRAHAWKS in 2015, He delighted Dr Ninestein by designing a personal DATA DUMP to allow Ninestein to store his total knowledge daily for retrieval, if needed by his clones.

Hiro has had no formal military training. Selected for TERRAHAWKS at the age of 15 by Dr Ninestein, Hiro was chosen for his phenomenal intelligence and his own advanced research in various fileds of high technology. In the first two years he designed and supervised the construction of the TERRAHAWKS Computer COmmand Centre, and achieved maximum grades in all his military proficiency tests in his spare time. Although strictly still a civilian, he undertook two successful ZZ missions for UNIPC during the first alien attack (2017)

Hiro is a loner in a universe of his own. He is dedicated to the success of the Terrahawks, and highly respected by Dr Ninestein. His intellectual powers belie his age and experience, but he often reveals the child in himself and occasionally allows his ego to over-ride the limits of his authority. Generous, friendly, Loyal, single-minded and very intense. A perfectionist with (nearly) all the necessary ingrediants for sucess. 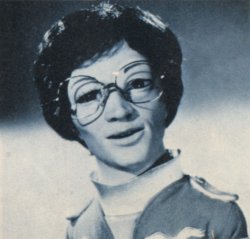