In December 1973, at a secret US military hospital in Texas, a 41-year-old American of Austrian descent, Professor Gerhard Stein volunteered for experimental surgery following his own extensive research into human cloning. Professor Stein was a brilliant man. Nine perfect clone embryos were created, and placed in different parts of the world to grow up under a cloak of secrecy. `Tiger` Ninestein is one of the nine `Steins`.

After a long and distinguished military career Ninestein officially retired as CIC UN High Command in the year 2013 at the age of 40. With the impending threat of the first alien attack he was persuaded to mastermind the creation of the TERRAHAWKS Earth Defence Squadron (2014), and subsequently to become its first commander (2018).

Tiger Ninestein is a superb military tactician and a tough, relentless fighter. Inter-planetary warfare calls for lightening responses and nerves of plasteelium. Ninestein can be ruthless in battle and compassionate in victory. He is the battle-hardeed general with the lives of millions resting on his reflexes and depending on his judgement. He is the ultimate man... and the ultimate boy. `TIM` is trying hard to keep him in tip-top shape.

Thanks to Hiro`s computer genius, Dr Ninestein can now `plug into` his personal DATA DUMP every 24 hours. He stores his total knowledge and experience so that in the event of his destruction a perfect replica could be operational within two hours of his arrival at the TERRAHAWKS base. 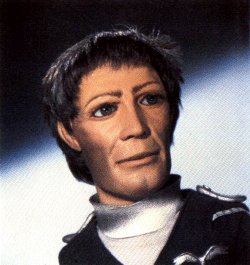