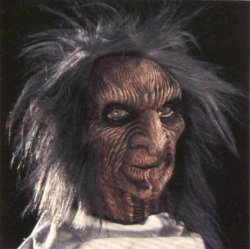 Zelda has been around, in one form or another, for hundreds of year. Her present form is based on the oldest and wisest female inhabitant of the planet Guk, who was 186! Once upon a time she was a mindless mechadroid, employed as a bodyguard for Prince Zegar in the Imperial Palace of Guk on the planet Alpha Centauri (sector P8 - Galactic A - Z). Prince Zegar was a vain humanoid, very old and ugly, but resourceful. he wanted his 'personal' slave mechadroids to be superior robots. Secretly he arranged for extensive experimental modifcations to Zelda and, quite by accident, she was imbued with the secret of self-determination. price Zegar's clumsey 'mechanics' had stumbles through the ultimare boundaries of science, and Zelda was omnipotent. Prince Zegar losat a good slave and found eternal peace. the planet Guk was Zelda's first tast of victory over the cruel and heartless humanoids. Her ambition

now was to bring all human life to heel and to seek revenge for their wicked crimes against the defenceless machines that they had created, and for their inhumanity to anything inhuman. Zelda could not fail. After all, she had made herself in the mould of her makers. She had the age and beauty of the humanoid - with the unlimitd power and energy of the machine.

the galatic domination and enslavery of humanoids.