service reports:
The sole surviving example of prototype Zeroid. No reported functional weaknesses. Observations indicate that logic circuits are subject to external manipulation under varying degrees of environmental stress. All three previous batch stereotypes were destroyed on a Search and Rescue mission, the success of which was due to their unaccountable and ungrogrammed 'heroics'. A very sophisticated design.

special characteristics:
The power nucleus of this Zeroid is a unique Iranium crystal from the planet Jupiter. hiro, who designed and built the prototypes, believes that this power source had introduced 'emotions' normally associated only with humanoid life forms, and Sergant Major Zero constantly confirms his agreement with this diagnosis. He desperately wants to be human, and likes to make 'decicions' which infuriates Doctor Ninestein, and tends to provoke sympathy from Mary. 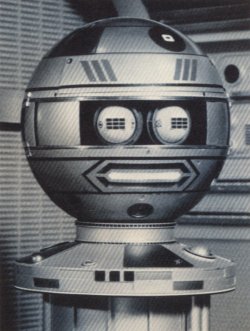